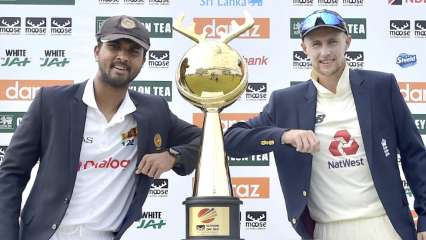 While all cricket matches had been postponed or cancelled because of the COVID-19 pandemic, a real cricket fan from England who had travelled to Sri Lanka for the sequence 10 months in the past, continued his keep on the nation in hopes of watching his group play.

However, Rob Lewis’ story didn’t have a contented ending as he was kicked out of the Galle International Stadium by the police earlier than a ball had been bowled in the primary Test.

According to Sportskeeda, Lewis was given restricted entry to the ramparts of the Galle Fort with no spectators contained in the stadium for safety causes.

However, he was ordered off simply after the nationwide anthems had been performed and even the banners he had positioned had been eliminated.

“I am very frustrated,” Rob Lewis mentioned, based on Sportskeeda. “I waited 10 months to watch this match and the police have kicked me out. At least I managed to sing ‘Jerusalem’. I am going to see the police (chief),” he mentioned.

“All I want to do is watch the match. They gave me half-an-hour to put up three banners and go. That’s all. There will be another nine days of play and I hope I will be able to get permission to go up there again”

As for the conflict, England rolled over Sri Lanka in the primary innings. England captain Joe Root struck his fiftieth take a look at fifty to place them in a powerful place. An unbeaten 110-run partnership between Jonny Bairstow and Root noticed England to 127-2 at stumps on Thursday.

Despite successful the toss and electing to bat, the hosts misplaced ten wickets for simply 135 runs in the primary innings. Stuart Broad and Dom Bess starred for England with the latter selecting up his second-ever five-for in Test cricket.